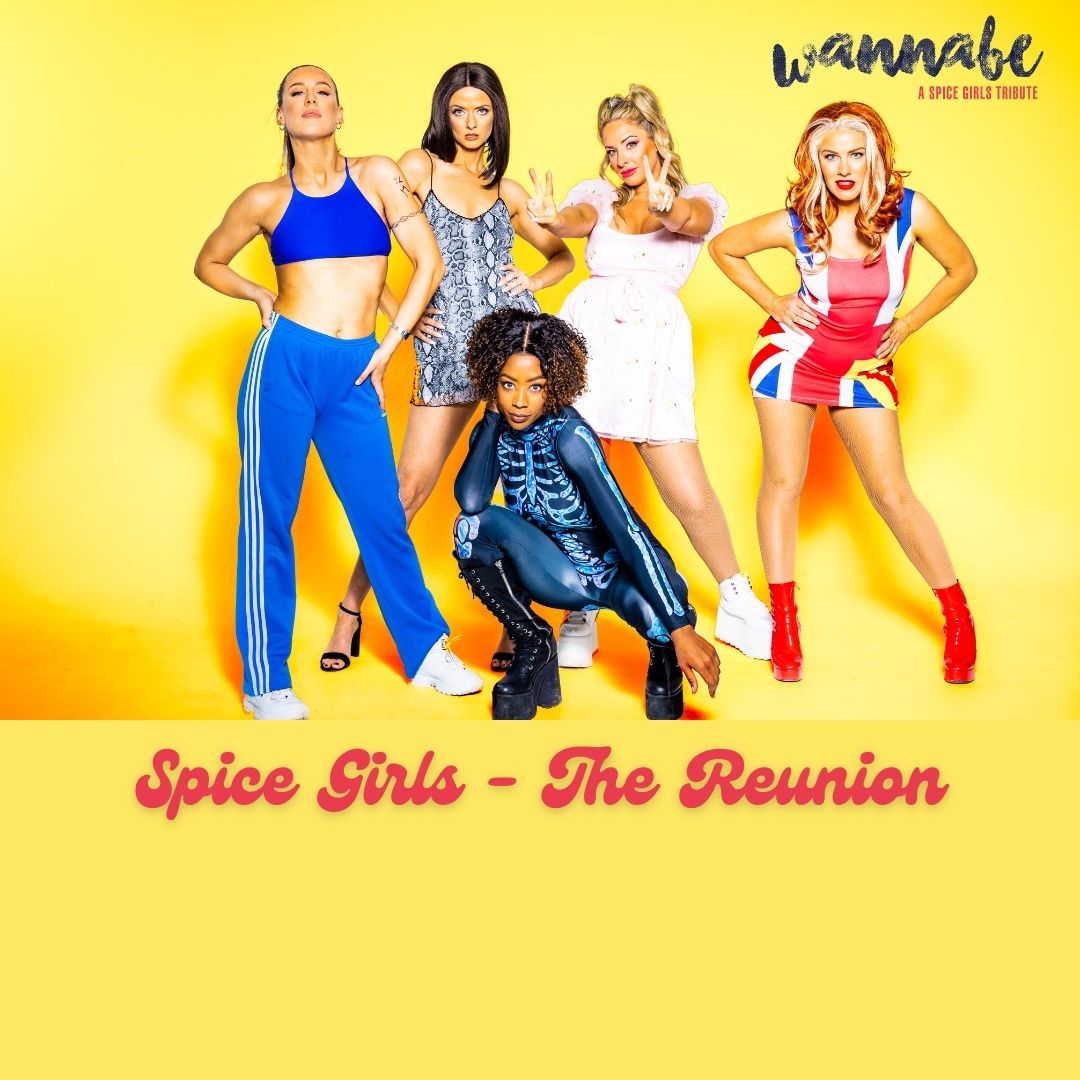 ALL AGES VIP MEET AND GREET PACKAGE- INCLUDES A TICKET TO THE SHOW!

Wannabe a Spice Girl? Get your exclusive VIP ticket to the Wannabe show and spice up your life with the following add-ons:

- First crack at the merch table

- Photo with the girls!

sharing a message of love, equality and, of course, GIRL POWER!

Stop. Close your eyes. Take a moment to remember. Do you recall a time, not so long ago? A time of innocence? A time of simplicity? A time of Dunkaroos, Beanie Babies, bubble chairs, white eye-liner, Ring-Pops, bucket hats and bicycle shorts? Let's be honest...It's no secret that the 90's were by far the most colourful, dynamic and entertaining decade of all. It really felt as though life couldn't get any

Then along came the Spice Girls. It was 1996 when the hit song “Wannabe” swept the world in a swell of pre-teen, bubble-gum hysteria. Ginger, Baby, Scary, Posh and Sporty became the new faces of pop music and girls (boys too!) everywhere were instant fans! With 65 million records sold world-wide, the Spice girls became the best selling girl-group of all time. It was total Spice-Mania!

Fast forward twenty years or so, and millennials are all grown up. Now, more than ever, people are feeling an urge to reminisce. With 90's nostalgia in full swing and talks of a Spice Girls reunion circulating online, there happens to be a new group in town that aims to satisfy the world's absolute craving for SPICE!

Wannabe has been thrilling audiences and blowing the roof off concert venues across NorthAmerica for the past 10 years. With giant personalities, mega-watt singing voices, spot-on choreography, costume changes, English accents and platform shoes, these powerhouse women have brought Girl Power into the 21st century with their larger-than life epic shows.

Wannabe is the brainchild of a group of Toronto based performers and musicians who also just happen to be best friends.The idea for Wannabe was born one summer when the girls were crammed in a house together performing in a summer musical, right around the start of 90’s nostalgia.The girls went to work. After an intense period of “Spice GirlsTraining”, which included studying concert footage and music videos, creating choreography, arranging songs and harmonies, assembling a six-piece backing band, and rehearsing for several months, Wannabe was ready to hit the stage for what they thought would be a one-off concert for friends and family at the legendary Toronto venue, The El Mocambo. They were wrong. The show sold out and the band hasn’t looked back since.

Wannabe has grown to become one of the most sought after acts in North America, selling out concert halls, theatres, clubs, casinos, outdoor festivals and more. As the band has gained popularity, the shows have expanded to include not only Spice Girls songs, but hits from other 90’s superstars including Brittany Spears, Janet Jackson, and Madonna. The girls have appeared on stages alongside legendary 90’s acts including TLC, The Goo Goo Dolls, Aqua, 98 Degrees, O-Town, Lance Bass (N’Sync) and Aaron Carter. Wannabe is as close to the real thing as you’re ever going to get!