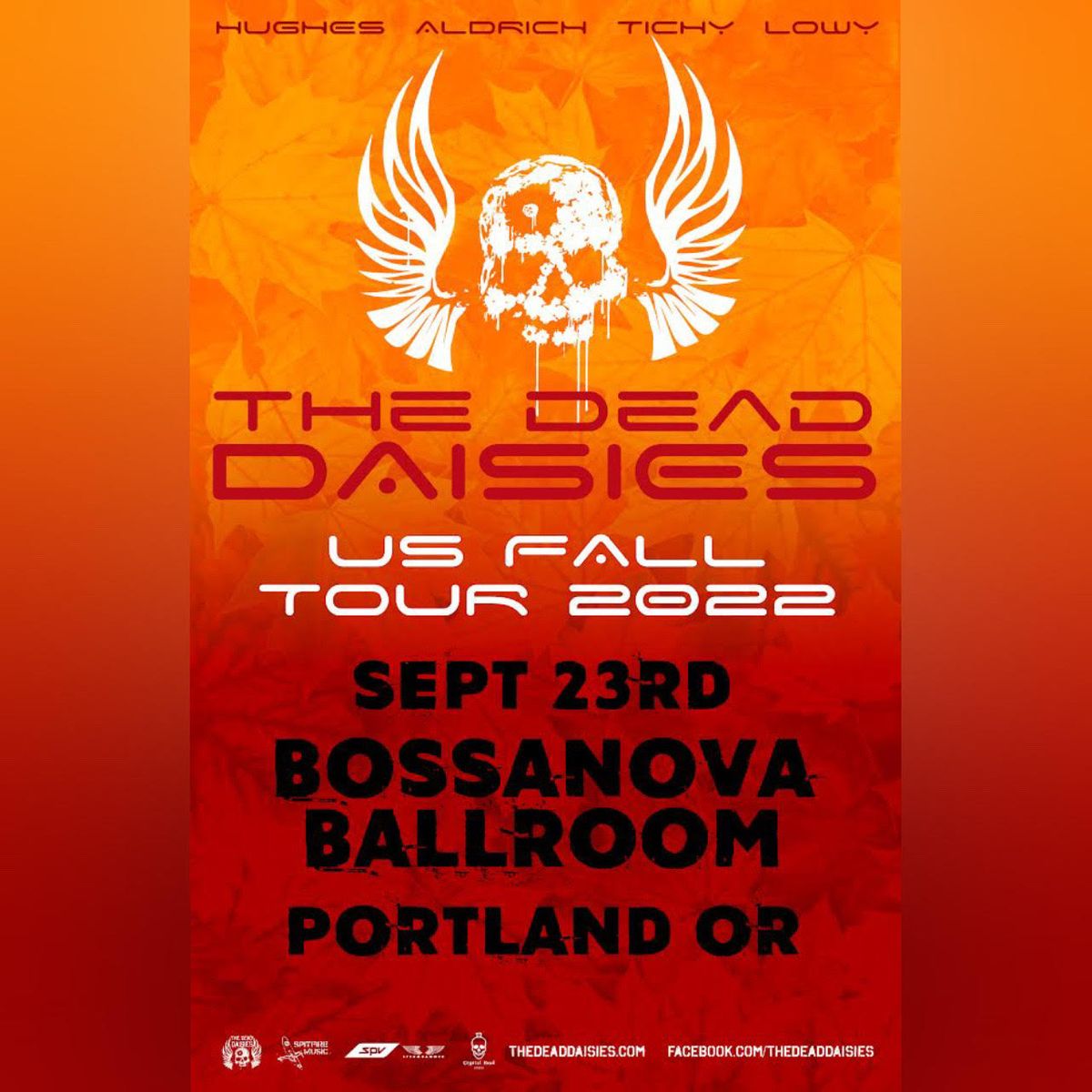 Rock’n’Roll is a trip, not a destination...we all know how the saying goes!

The Dead Daisies continue their journey towards 2023 with new music, virtual performances and adventures.

The Dead Daisies have gone from strength to strength since the release of their self-titled album in 2013. They have released five studio, one live and one covers album to a growing army of fans worldwide and are praised by the global media in an era where Rock has been declared dead time and time again.

The Daisies started their next chapter in 2019 welcoming Glenn Hughes, also known as “The Voice Of Rock“. Glenn took over lead vocals and bass guitar, joining guitarists Doug Aldrich and David Lowy. T

With the addition of Glenn Hughes, The Daisies supercharge their front line through his rock solid bass grooves and unmatched vocal intensity. As all fans know, the man is a true original, inducted into the Rock And Roll Hall of Fame, with a rich history of music that features heavy weights like Deep Purple and Black Country Communion as well as a successful solo career. One might say: “They don’t build rockers like him anymore”.

Followers can expect more High-Voltage Rock songs, indomitable grooves and spellbinding lyrics, all the ingredients that have made this music so timeless, out-living trends of the modern day. The sound of The Dead Daisies is entrenched in the Hard Rock way of life we all love but as a living, breathing rock band, they are constantly evolving & bringing new dynamics to a classic style.

They’ve conducted multiple headline tours throughout Europe, Japan, South & North America and conquered some of the worlds’ most prestigious festivals such as Download, Wacken, Graspop, Sweden Rock as well as Woodstock Poland, where they played the notable Concert for Peace with a 60-piece orchestra in front of over 300,000 people in 2017. Significantly, they were the first American Rock band welcomed back to Cuba after the embargo was lifted in 2015.

It’s the uplifting experience of a live show that makes Rock music so encompassing and where The Dead Daisies always deliver. Their concerts are known for creating a special connection between the players and their audience, giving life to each other, singing, screaming and relishing in the moment!!!

‘Unspoken’ was the first single from the new album ‘Holy Ground’. Released in April 2020, the song received global media praise and accolades with a record number of streams on Spotify and plays on YouTube in its first two weeks of release. It definitely broke the silence! This was

Whitesnake) has returned to the line-up for 2022.

followed by ‘Bustle and Flow’ in September breaking new ground on the US Classic Rock Chart, the Billboard Mainstream Rock Indicator chart and the Foundations Chart. The third single ‘Holy Ground’ was released on December 4th to immediate airplay on ‘A’ playlists on commercial and digital radio across the globe. ‘Chosen and Justified’, the fourth single from Holy Ground was released on March 5th to immediate airplay around the planet!

In July 2020, The Lockdown Sessions EP was released with four stripped back semi-acoustic tracks, ‘Unspoken’, ‘Fortunate Son’, ‘Righteous Days’ and an amazing version of the Humble Pie classic, ’30 Days In The Hole’ with Glenn and Doug.

The new album 'Holy Ground', released on 22nd January 2021, was recorded by Producer Ben Grosse at La Fabrique Studio in the South of France. It features eleven hard hitting songs that through time will stand up as the finest body of work the band has completed to date. Featuring infectious grooves from ‘Like No Other’ to sending chills down your spine in the atmospheric ‘Far Away’, it’s easy to see why both fans and critics are blown away by this album. Returning to the lineup, powerhouse drummer Tommy Clufetos who played on the fifth single ‘Like No Other’ 2021 released on May 7th hit Top 20 on the Billboard Mainstream Rock Indicator Chart and Top 10 on the Foundations Secondary Market Rock Chart. He joined the band on their Get Out Of The House US dates in June/July 2021.

A free to play mobile game ‘Daisys Revenge’ was launched in May taking the graphics and narrative from the bands chart topping music video ‘Bustle And Flow’ and set to a soundtrack of rock music from the Daisies new album ‘Holy Ground’.

A crowd favourite on the US dates, 'My Fate' (Radio Edit) launched on August 6th and a very short film for 'Like No Other' aired on August 13th.

On September 17th the latest single ‘Saving Grace’ (Radio Edit) was released, a band favourite from the album ‘Holy Ground’. In September the band headed out on the ‘Like No Other’ tour, playing theatres from the east coast to the west coast, before their October and November UK tour, the first in nearly three years.

The first half of 2022 has seen drummer extraordinaire Brian Tichy return to the fold, writing and recording a new album with Producer Ben Grosse in LA and releasing four live singles from their Like No Other US, England/Wales Tour. ‘Rise Up’ released on February 4th, ‘Bustle And Flow‘, in March, Long Way To Go’ in April and the crown on the ‘Live From Daisyland’ EP - ‘Burn’ in April.

The first single ‘Radiance’ from the upcoming album of the same name, radiated some heat on May 27th just prior to the EU Summer Tour with a meta cinematic and a glimpse into the metaverse. The 2nd single ‘Shine On’ came out on July 8th during the European Tour along with an announcement of their US Fall Tour in September.

The Dead Daisies are pushing forward, giving energy and taking chances to ensure that every person who experiences them has no doubt that Rock is Indeed Alive & Well.