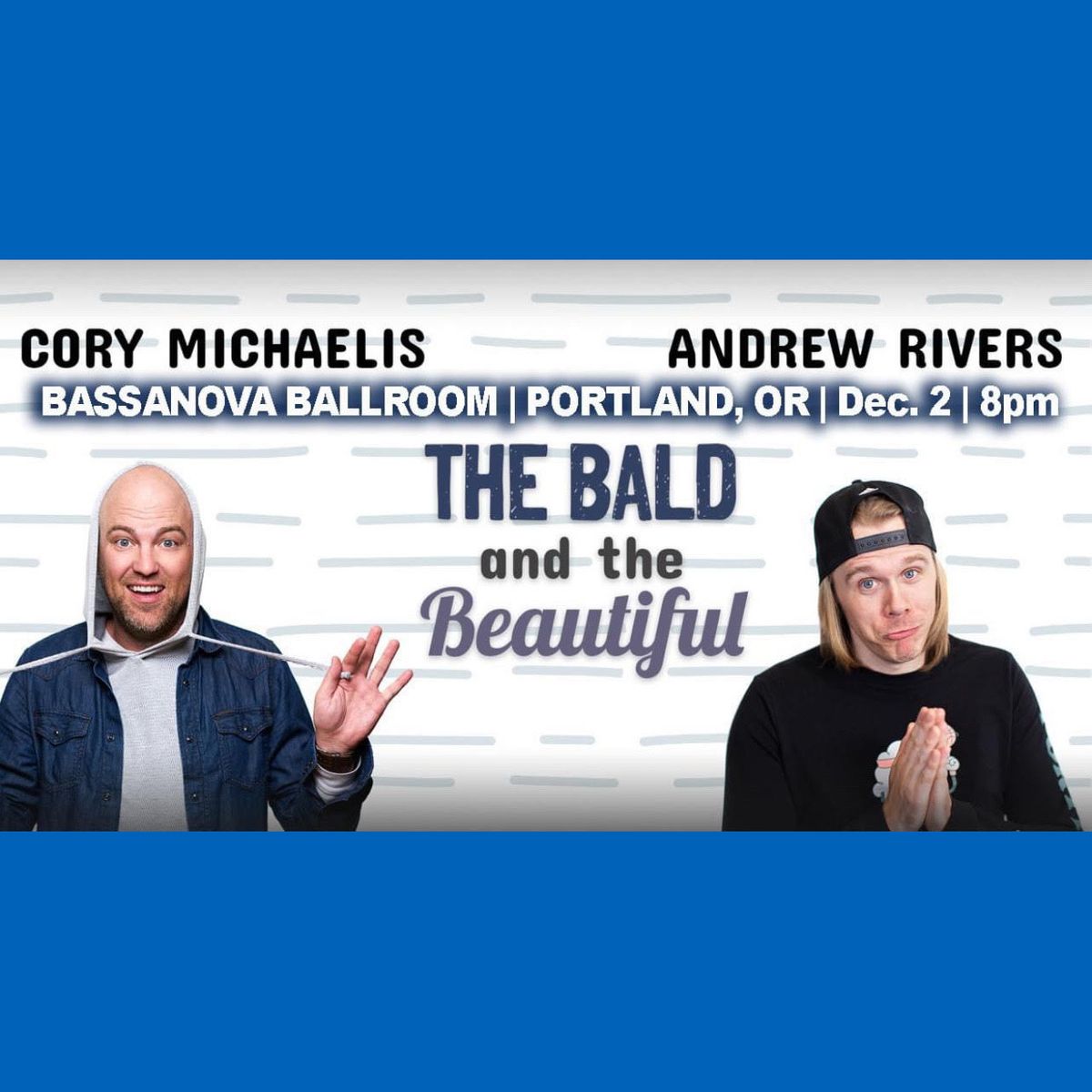 Best friends Andrew Rivers and Cory Michaelis team up for the Bald and Beautiful tour together so they're not so lonely on the road.

After teaching high school for 12 years, Cory Michaelis "retired" to do comedy full time because he wanted to try out both of the lowest paying jobs in America. Now in his 12th year as a comedian (he's not THAT old...there was some overlap)

Cory has a Dry Bar Comedy Special -"Bad Teacher" - that snagged over 50 million views. His debut album, "The Collage Dropout," was released by 800 Lb. Gorilla Records and charted at #2 on iTunes & Billboard (because it was the only album released that week). Cory was a finalist in the Seattle Comedy Competition which means he didn't win and was in Season 2 of Netflix's "Huge in France" with Gad Almelah.

In addition to headlining comedy clubs all over the US and Canada, Cory has taken his act global, doing tours in Dubai, Abu Dhabi, and Pakistan. He also produces Everett Comedy Night in hometown which has had 8 straight years of sold out shows.

His act is sharp and irreverent and not suitable for the high school students he used to teach.

Andrew’s very personal and fun storytelling comedy, combined with his exemplary work ethic has earned him high praise from some of the best comedians in the business. Andrew is a regular opener for Christopher Titus and has toured across North America and Europe with Steve Hofstetter.

Andrew was featured in the popular “Truth or Drink” webseries from Buzzfeed and his DryBar Comedy Special has over 15 million views on facebook. His youtube pandemic special in 2020 hit 100k views in the first two months and his debut album from 800lb Gorilla Records "For the Wrong Reasons" releases worldwide October 19th.

Check out more at andrewjrivers.com

Q: What is this event?

A: I'm a comedian. Buy a ticket, and I will tell you jokes. You sit and drink and laugh and buy a t shirt and then you go home and tell your friends you saw a famous guy.

Q: Are you funny?

A: I've been doing comedy professionally for 12 years. Most nights it goes well. Check out a video and decide:

Q: Is there a break?

A: The show is continuous and runs 90 minutes.

Q: Is the show Family Friendly?

A: Depends how cool your family is. Your 10 year old might not get the jokes but the jokes will be nothing worse than they've heard on a school bus.

Q: What is the age limit?

Q: Will food & drinks be available?

A: Yes! Check out the venue's website for a menu!

Q: Where's is the venue?

A: Oh boy... new to the internet? That's cool just click the venue's name above and it'll have an address there.

Q: Where do I buy tickets?

A: There's literally a button that says buy tickets on this page.

A: Probably not! Are you a professional comedian? Send me a tape and we can chat. but I usually bring a friend to open the show with me.

Q: What time do doors open?

A: It depends but generally an hour before showtime.

Q: Can my business get involved?

A: Yes! Please email me if you want to sponsor the event.

Q; OMG You're famous. Can I touch you?

A: Free meet and greats after the show for everybody.

A: If there are early bird tickets, those are cheap, first come, first serve tickets for people on a budget or people without commitment issues. Some venues don't let me do it.

Q: Do I need proof of vaccination?

A: All local laws apply. Check with the venue.

General Admission is just a ticket to the show.

VIP ticket will reserve you a ticket close to the front and I'll give you a free beer koozie at the show. Plus afterwards, I'll email you a digital download package with all of my comedy. Most of it is available for free on the internet anyway, but this is basically a way of throwing me some extra cash because you feel like it. Plus you don't have to go scouring the internet to find it.